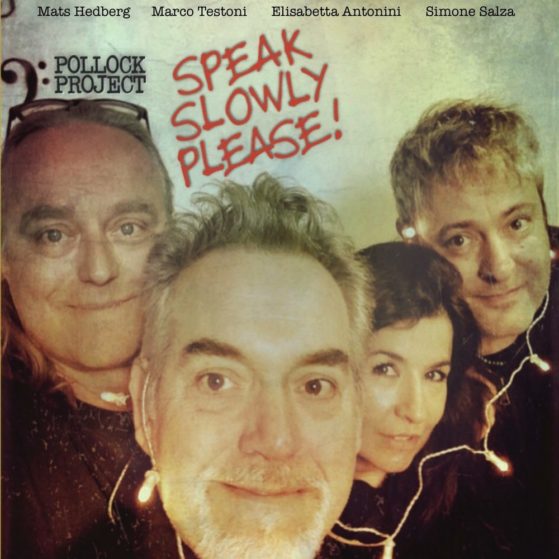 Speak Slowly Please! This album represents a jazztronica turning point in the history of the Pollock Project. If the first three CDs followed a visionary, art-jazz pathway, that matrix has blended into a unique, transversal musical style which has now become the group’s distinctive trait. An unpredictable, evocative mix of contemporary jazz, electronic, post-progressive and world music flanked by the visual arts and moving freely between the classical and the modern.

This the mark of this record is the number 4: the fourth album and four musicians, as the Pollock Project is now a quartet. Alongside the group’s creator Marco Testoni, the composer of all the pieces (piano, handpan, percussions; winner of the Premio Colonne Sonore 2014 award for soundtracks and that for video-clip composer of the year Premio Roma Videoclip 2016) we find Elisabetta Antonini (voice, live electronics. Winner of the Top Jazz 2014 – best talent award) and Simone Salza (saxophones and clarinet; interpreter of music by masters of soundtracks Ennio Morricone and Nicola Piovani) and the Swedish guitarist Mats Hedberg, who, with his intense, ductile style, has joined the group permanently. Invaluable contributions to this album were provided by special guests: Primiano Di Biase (Dire Straits Legacy), Giancarlo Russo (Meteor Shower) and Guido Benigni (Acustica Medievale).

As is the Pollock Project’s won’t, the title of the album is programmatic: an ironic and friendly invitation to use language clearly and directly while expressing profound musical and cultural concepts. From the very first track, L As In A Gift, a song composed by Marco Testoni with lyrics by the Irish songwriter Kay McCarthy, but above all, with its title-track Speak Slowly Please!, a modern ballad inspired by Julio Cortazar and Carol Dunlop’s book (Autonauts of the Cosmoroute. A Timeless Voyage from Paris to Marseilles), the record reveals its discontinuity with the group’s previous productions as it emerges from its previous realm of instrumental music to enter into that of songwriting.

This is how Marco Testoni explains the title of the album: “Speak Slowly Please is a small phrase which conceals, however, beautiful, simple contents. It is a request for clarity, but also a desire to understand one’s interlocutor. I ask you to talk slowly in order to understand you better and you try to make yourself understood by not presuming that I know your language well. It may look like nonsense, but it is not! This, whether referred to everyday life or to music.“

Among the other tracks we have Nana, a song dedicated to the musicians who accompanied in 1958 the strip act by the turkish dancer Aiché Nana which ushered in La Dolce Vita, and a selection of pieces from the first three albums, re-arranged for the new formation: Unnecessary, Pe No Chao and Impossible Humans. Last but not least, two instrumental which cried out for reinterpretation to reveal their profound novelty: Miles Davis’s So What and Frank Zappa’s incredibly poetic and lyrical Watermelon in Easter Hay, so different from the rest of the great American musician’s production. These two tracks, apparently poles apart, are actually united by the extraordinary and unpredictable transversal character of their authors.